There are many stakeholders in Cannabis, but the biggest argument is whether or not marijuana should remain a Schedule 1 drug. Since cannabis was first made illegal in 1937, it has been one of the most restricted substances on Earth and its legalization could open up opportunities for future innovation.

The “list of schedule 1 drugs” is a list of the most dangerous and addictive substances in the United States. Cannabis is still on this list, despite being legalized across many states. 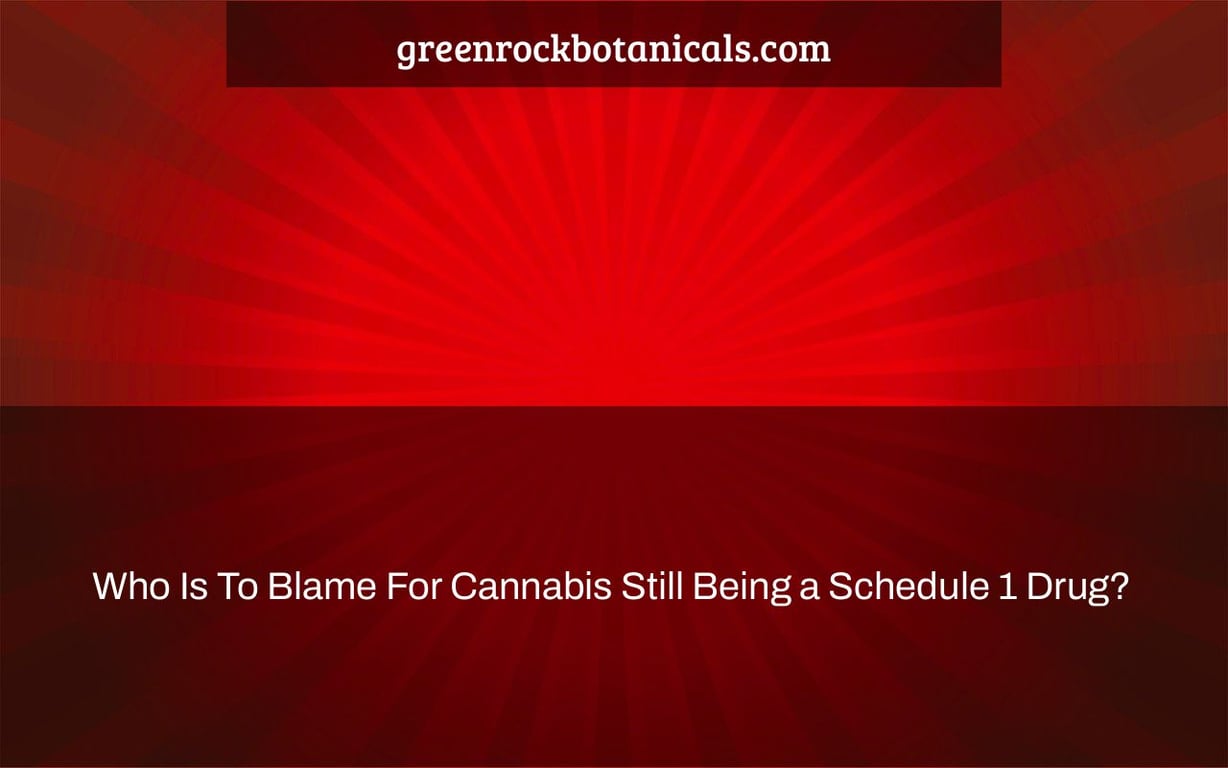 Is it the DEA’s or HHS’s fault?

Is marijuana useful for medicinal purposes? That is the issue. And the answer varies according on who you ask.

On the one hand, via their authorized medical cannabis programs, 36 states and the District of Columbia have said yes. Then, on a federal level, officials insist on no, maintaining marijuana classified as a Schedule 1 Substance, which means it has no recognised medicinal use and a significant potential for abuse.

According to Marijuana Moment, the Competitive Enterprise Institute (CEI) recently sent a letter to the White House Office of Management and Budget (OMB) requesting assistance in settling a long-running disagreement over the breach of the Information Quality Act in regard to cannabis.

What Happened: The Drug Enforcement Administration vs. the Department of Health and Human Services

The Drug Enforcement Administration (DEA) and the United States Department of Health and Human Services (HHS) have been squabbling about who is responsible for establishing an impartial, peer-reviewed research on marijuana’s medicinal potential.

According to the organization, “HHS contends DEA was accountable for IQA compliance since DEA distributed the assessment without HHS clearance.”

“The DEA asserts that HHS is responsible for compliance since HHS conducted the review.”

The scientific information provided by HHS to the DEA and utilized to maintain marijuana classified as a Schedule 1 Substance is faulty, according to CEI.

According to the CEI, new peer-reviewed research may help smooth the way for cannabis rescheduling.

“In our opinion, both authorities failed to fulfill their statutory obligations. According to CEI’s letter to the White House, “HHS should have peer-reviewed the material before sending the report to [Food and Drug Administration], given that HHS knew the information would be distributed and relied upon for regulatory action by FDA as required by legislation.”

“Moreover, DEA should not have released the HHS assessment without first confirming that the IQA standards were completed (including arranging for peer review if HHS refused).”

“President Biden has committed to ‘follow the research,” according to the organization. And that is all we have called for: independent scientific experts to follow the research and report on whether or not they feel HHS’ scientific assertions are correct. We think that once that is done, those scientific experts, together with the great majority of states and medical organizations, would agree that marijuana has some medicinal applications and hence cannot be classed as a Schedule I substance.”

The DEA declined a petition to explore rescheduling cannabis in 2016, based mostly on the conclusions of the HHS.

Is peer review able to make a difference?

While a peer review may aid in the collection of additional science-based evidence on cannabis, some legal experts feel it will not be sufficient for marijuana rescheduling.

“While peer review would be beneficial,” Shane Pennington, an attorney who has been engaged in cases against the DEA over marijuana scheduling, told Marijuana Moment, “it will never get to the root issue with federal marijuana policy.”

“That’s because the DEA’s long-standing five-part methodology for assessing whether marijuana has a presently acknowledged medicinal purpose in treatment in the United States has skewed FDA’s scientific review of marijuana,” he said.

“That five-part standard skews science, and it was intended to.”

The “schedule 2 drugs” is a category of drugs that are considered to have medicinal value but are still federally illegal. The most famous example of this is cannabis, which has been classified as a Schedule 1 drug since 1970.

How did cannabis become a Schedule 1 drug?

A: Cannabis was placed in Schedule 1 by the Controlled Substances Act of 1970. The act, a part of the larger Drug Abuse Prevention and Control Act, put cannabis on an equal level as other drugs such as heroin and LSD.

Who regulates cannabis in the US?

A: The Drug Enforcement Administration is the federal agency responsible for regulating drugs in the United States. It also sets criminal penalties for violations of drug laws.

What class of drug is cannabis in Canada?

A: Cannabis is classified as a Schedule II drug in Canada. This classification means that cannabis is considered to have some medical benefits, but also has the potential for abuse.